Welcome to The Reading Connection’s blog, where you’ll find the best guidance on reading aloud to kids. Whether you are a TRC Read-Aloud volunteer, parent or student, the book themes and crafts ideas, child development guidelines and recommended websites will expand your world. For 25 years, The Reading Connection has worked to improve the lives of at-risk kids by linking the magic of reading to fun experiences that inspire a passion for learning. Visit our website at www.thereadingconnection.org. 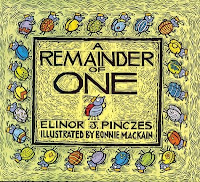 
For math to be fun, kids need to have good number sense. That means being at ease playing with numbers and seeing patterns. A Remainder of One by Elinor J. Pinczes is a delightful book about 25 ladybugs marching in 2's, 3's, 4's, and finally 5's. It is not fun being the one left over. Pinczes wrote another book on grouping numbers titled One Hundred Hungry Ants. Both books are entertaining, have cute illustrations, and are easy to read aloud. Lining up paper clips, Cheerios, or the kids themselves in groups is a concrete way of exploring the concept.

Were you stumped by word problems that involved trains and tunnels? Spaghetti and Meatballs for All! deals with the more realistic problem of seating people for a dinner party. At first is seems so simple until you realize there is more than one way to solve the problem. This book allows kids to look at different options. There is more than one "right" answer. Other books that help children have fun with numbers include The Grapes of Math by Greg Tang and Sir Cumference and All the King's Tens by Cindy Neuschwander. 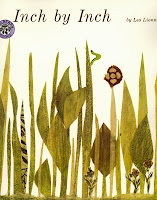 Measurement seems obvious to adults, but it is often confusing to children. There are so many different units of measurement. Kids need practice and some personal ownership.

Leo Lionni's classic Inch by Inch is about an inchworm who outsmarts the birds who want to eat him by measuring them. Measuring Penny, by Loreen Leedy, is a cute book about a child measuring her dog, Penny, in every way possible.

Children love learning how to use a measuring tape and measuring themselves. Let them practice by finding the size of their hands, feet, and heads. They also think it is fun to measure with non-standard units like toothpicks or pennies.
STEM


STEM (Science, Technology, Engineering, and Math) education is an important focus for American schools, but science seems to get all the attention.  We seldom focus on the last three areas when we read to kids.  There are now so many great math books available that it is easy to include them when you read with a child. The links below can help you find math books and activities that most interest you.

Thanks to a generous donation, TRC now has a variety of math books and math activity packets for volunteers to use. Click here for a list of books and activity packs available.

For more math titles and activities, click here.  Look for more information about an upcoming volunteer seminar about integrating STEM themes into Read-Alouds.

To learn more about integrating STEM themes into Read-Alouds, join us for a volunteer seminar on Tuesday, March 19 at 7:00 p.m..  Location is to be determined.  Contact Stephanie Berman for more information.


To receive credit for this online training, please fill out the form here.
No comments:
Email ThisBlogThis!Share to TwitterShare to FacebookShare to Pinterest

Working towards the dream: race at Read-Alouds

As we remember Martin Luther King Jr. this week, it's a good time to examine the ways that inequality seeps into the corners of everyday life in ways that are easy for the privileged to overlook. While race is never an easy thing to talk about, it's an important thing to talk about, and it's important to be aware of the small racial inequalities that are cultural, not legal, and are therefore harder to overcome.

I was lucky in my childhood: if I went to the library and pulled a book off the shelf, chances are the characters in it would look like me. It's hard to talk about, embarrassing for me to admit--and symptomatic of larger cultural failures in the United States--but the fact is (and there's no way to beat around the bush): picture books are overwhelmingly about white people.And, as discussed in the New York Times' recent article, children of color don't have the privilege of seeing themselves in the books they're reading.While it's important for children of every color to be exposed to books with characters who have different skin tones--it certainly would have been good for me--it's exceptionally important to keep this in mind at TRC Read-Alouds. Because economic and racial inequities go hand-in-hand in the United States, statistically speaking, the overwhelming majority of Read-Aloud attendees aren't white.

The ideal picture book--for any child-- features characters of varying race without being about race. The unfortunate truth is that these books are harder to find--especially if you, like me, were raised mostly reading books about white people.  But they're out there. A personal favorite is The Snowy Day by Ezra Jack Keats. 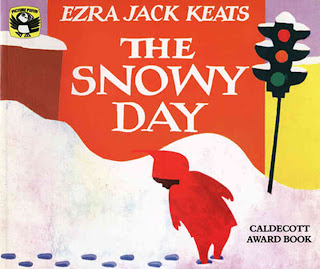 Another way to try to combat this problem is to choose books like Circle of Friends by Giora Carmi, where race is ambiguous. 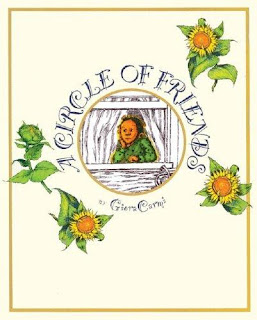 And of course, books that feature animals circumvent issues of characters' race altogether--though it would be best if we didn't have to depend on that.

Cultural racial inequality in the United States is pervasive and historical and hard to beat. We still have not achieved Martin Luther King Jr.'s dream. So when you choose books, flip through and think about what messages the races of people in the illustrations will send. Make choices consciously. Be aware.

To receive credit for this online training, please fill out the form here. 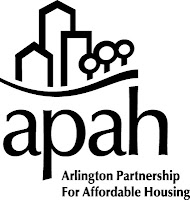 Columbia Grove is located in south Arlington, off of Columbia Pike and near Bailey's Crossroads at 1010 S. Frederick Street. The 208 units in 14 garden apartment buildings are situated among large areas of green space and outdoor play areas. Over 100 children call Columbia Grove home and attend Abingdon and Claremont elementary schools. The Read-Aloud program will be the first children's programming at Columbia Grove.

The Read-Aloud program’s goal is to share the joy and excitement of books with children living in homeless shelters and affordable apartment complexes. Volunteers bring books to life during one-hour Read-Alouds that engage children and include themed hands-on activities. 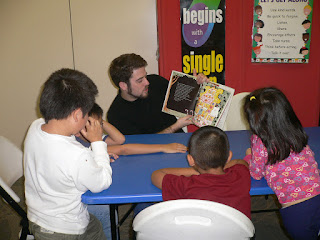 New Read-Aloud volunteers must attend an orientation session, clear a background check and commit to reading one Monday a month for a minimum of one year. All volunteers must be at least 18 years of age. Orientation for Columbia Grove volunteers will be held on Saturday, February 2, 2013 from 10:30 a.m. to 1:00 p.m. at the Arlington Central Library at 1015 N. Quincy St., Arlington, VA 22201. 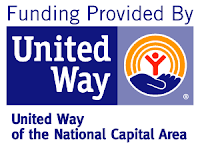 No comments:
Email ThisBlogThis!Share to TwitterShare to FacebookShare to Pinterest

Our team took a stealth approach to our last Read-Aloud with a theme of "Ninjas!" We gathered as a large group and began with the non-fiction book, "You Wouldn't Want to Be a Ninja!" to learn exactly what a ninja is and where the name comes from. 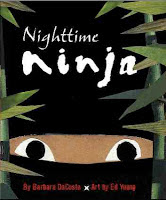 To set the stage, we also read a bit about the historical role of ninjas in 16th century Japan. We moved on to some picture books, including:

We also had a large selection of older reader books that were thematically appropriate (Stone Rabbit, Choose Your Own Adventure, etc.). However, most were graphic novels and did not lend themselves well to being read aloud in a group setting, and the kids opted to stay together this night as our group was smaller than usual.

After reading we moved to the tables to create ninja headbands. We took 3" x 44" strips of muslin fabric and used fabric markers to write our ninja names using a ninja alphabet one volunteer found online.

While we worked the kids were able to taste a variety of Japanese snacks including green tea drinks, ginger cookies, rice cracker snack mix, and plain and wasabi dried seaweed. 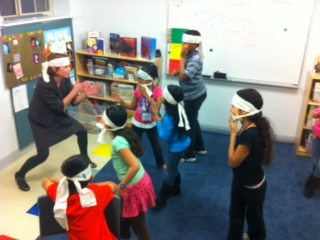 Kids who finished their headbands quickly moved back to the rug to play Sensei Says (like Simon Says with ninja moves). We said things like "Master Tsutsu [from one of the books we read] says put your hands at your heart and bow," or "Master Tsutsu says kick your leg once."

We had planned ahead and added a few ninja books to the book selection choices and those were well received during the give-away portion of the evening.

To receive credit for this online training, please fill out the form here.
No comments:
Email ThisBlogThis!Share to TwitterShare to FacebookShare to Pinterest
Newer Posts Older Posts Home
Subscribe to: Posts (Atom)

Reading Tip of the Day